by Xavier in Big Data, General

Let me start off by saying this: this post is not intended to be a political statement.

It is not my intention to start a red vs. blue thing. I simply want to look at the data and find out if the claims of “biggest economic growth in history” from Trump stand from the perspective of Artificial Intelligence (AI), using several different Machine Learning algorithms.

The Statement and the Methodology

The last 3 and change years the most repeated phrase has been “biggest economic growth ever” or something of that sort from 45.

But… does this stand true?

Lucky for us, the data is public. It is possible to check the unemployment records in the US as well as the stock market.

There’s even plenty of charts that try to show the evolution of both unemployment and the stock market in both the Obama and Trump eras.

But, has the US been “on a roll and recovery” during Trump or is he just reaping the benefits of what Obama did?

There are plenty of articles and serious publications that try to show this, including:

– US 2020 election: The economy under Trump in six charts from the BBC

– Trump boasts the US economy is the best it’s ever been under his watch. Here are 9 charts showing how it compares to the Obama and Bush presidencies from Business Insider

– The Trump vs. Obama economy — in 16 charts from Washington Post

But what if we take a different approach?

Let’s take the data for both unemployment and the stock market and use the Obama era as our training set and the Trump era as our testing set.

That way, we predict if Trump actually helped improve the economy in terms of creating jobs and making the stock market grow.

Here’s a repository with the unemployment and stock market data. Go ahead, create your own Machine Learning model to determine if the US grew economically because of Trump or simply continued from what Obama created.

If you create a model, go ahead and share your results. Create a pull-request if you want.

Obama received an unemployment rate of close to 10% when he started his term, in large part because of the 2008 crisis—the great recession as how some call it.

In 2016 when he handed the keys to the White House to Trump, the unemployment rate was a tad over 4%.

The trend for unemployment kept for the next few years, until it got to about 3.5%—that’s pre-covid.

If I ignore Covid and simply use Obama as my training data, then I am able to predict unemployment for the next few years until the pandemic began.

The Machine Learning model predicted quite well, but as you can see, unemployment has actually declined not that much since he took office.

Maybe that last part is a bit harder, I can agree on that, but my point is that it looks like there was no real change, the trend just stayed the same.

Referring to the stock market´s pre-covid-19 record highs, the wealthiest ten percent of the shareholders own more than ninety percent of all stocks. And the 2017 tax cut was only beneficial toward corporations and the rich. With middle class income households getting a tax cut of about nine hundred thirty dollars and the top one percent really enjoying a cut of more than fifty thousand dollars.

The unemployment rate pre-covid-19 was indeed at a half century low but this rate has been falling steadily since 2011, so we can’t really see a difference since he took office. Even though 6.6 million jobs were created under the Trump administration, we shouldn’t forget that Obama inherited an economy during the worst financial crisis since the Great Depression. Therefore, job creation under the Trump administration is merely a continuation of an improving job market and can´t be compared to the turnaround in the early years of the Obama administration.

Monthly job growth was higher under Obama than in the first two years after Trump took office. Obama added over 1.6 million more jobs in his last three years in office compared to Trump’s first three years.

Regarding the stock market, here is a chart below. In blue we can see the Obama years. The stock market more than doubled during his time.

It did grow too with Trump; I hear some people say that it is all because of how Obama provided a stable and drama free environment for companies to grow and thrive while other people say that the economy boomed (although I may say “kept booming”) because of Trump’s policies.

Well, my Machine Learning model basically thinks that the stock market kept growing just like the momentum that you gain when someone pushes you on a bike… you keep going because you got the right push. 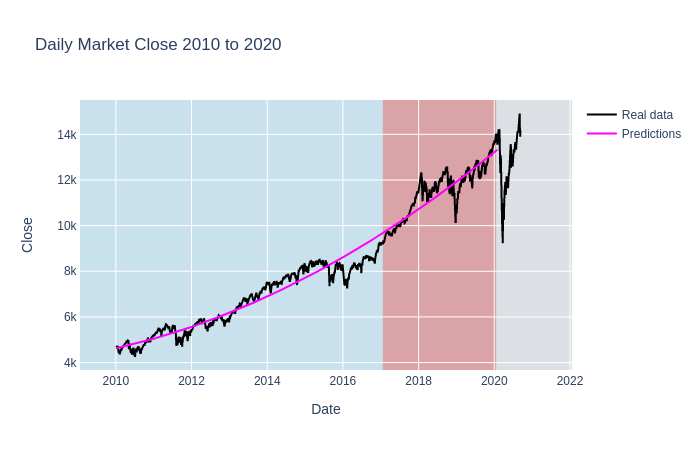 It is possible that there are two reasons as to why the stock markets have risen. The tax cuts and the federal reserve that is keeping the interest rates low and flooding the markets with cash. And how did the stock market perform under Trump’s leadership when compared to Obama´s?  We are doing our best to keep this a data driven piece and not turn it into a political viewpoint.

And we want to point out again that no one can claim responsibility over the stock market, only slight influences can be observed.

We can observe a steady climb through most of Trump’s first two years. But the market still did better with Obama as president for his first three years.

Even though as mentioned frequently before that it is not valid to attribute stock market performance to a person. We can track data over longer time periods and see that US stock performs better under democrats.

(Forbes reports. From March 4, 1929 through July 5, 2016, U.S. stocks returned an average of 1.71% under Republican administrations and 10.83% under Democratic administrations. While an updated analysis would have the gap narrowing, it would still be significant.)

In essence the stock market was thriving under both presidents. Leaving us to think that capitalism acts regardless of who is politically in charge.

The stock market was up 46% with Obama compared to the 25% under Trump. Obama ended his presidency with one of the best gains of any president in modern history. When Trump started and introduced his tax cut, stocks were high but they have declined progressively since he started his trade war.

His 2019 stock market gains are still minimal compared to his predecessors. Stocks grew faster after the reelection of both Clinton and Obama. A 28.6% growth during Trump’s third year fell pale compared with Obama´s 32% when recovering from a financial crisis.

Trump likes to credit himself with bringing about an economic boom the likes of which the world has never seen before. He feels he has launched the great American comeback. But in reality, he didn’t really attain his goal of raising the economy’s growth rate to four percent. There was only a small increase in G.D.P. growth. His tax cut did create growth in 2018 but the effects were severely pushed back by the trade war. We could argue that economic growth did perform slightly better than under Obama but not in comparison with all his recent predecessors.

Trump especially uses GDP as an example of his success and a major reason for his reelection. It is worthwhile to mention that presidents can’t really take credit for the state of the economy. There are many factors that have an impact on growth that have nothing to do with their policies.

To be totally accurate, Trump started his presidency in a steady economy, unlike Obama´s time period that was dealing with a serious recession. Trump frequently points out that the US economy is the best it has ever been. This is not the case if we take into account the state of wage growth or business investment. Looking at the GDP growth under Trump, it doesn’t reach his promised 3% mark annually. It is true that the economy has improved under Trump but the recovery began under Obama.

Again there are a multitude of factors to consider when measuring the state of the economy, therefore it is not actually valid to ascribe the situation to one president. Here’s how the Trump administration’s economic accomplishments actually compare to Obama’s.

If we do want to compare Trump’s GDP growth to Obama´s over a period of three years and look at the numbers it is safe to say that in Trump’s case it is actually slower. Obama´s last three years showed more growth compared to Trump´s. Claiming that he has built the greatest ever US economy before the coronavirus outbreak is not exactly true either. It was doing well but again this started during the Obama administration and also there were periods when it was a lot stronger. The annual average growth was roughly similar during both presidencies.

Pointing to the tax cuts Trump introduced, they were beneficial to economic growth for about a year but didn’t pay for themselves and created a Federal budget deficit of $1 trillion, something that has never occurred in a non-recession situation. Actually, GDP growth was higher on average under Obama in 2014 and 2015 than compared to Trump in 2017 and 2018.

“We lowered our business tax from the highest in the developed world down to one that’s not only competitive, but one of the lower taxes.”
Donald Trump

There are no signs that capital spending and wages are increasing because of the tax cut. The tax cut only boosted the net worth of CEO s and stockholders. And left a debt of about $2.9 trillion. The tax cut did not meet the goal of more investment in new equipment and factories. There was a slight increase in business spending in 2018 but have since declined heavily mainly because of the trade war.

During Obama´s presidency the national debt swelled when trying to rebuild the economy after the financial crisis. But at the end of his term this deficit had significantly declined. Because of Trump’s tax cut and an increase in government spending the annual deficit has considerably gone up again.

We thought it would be interesting to look at Trump’s economic growth claims with a fairly neutral data driven approach. We see that there hasn’t been a significant growth during Trump’s precovid years and that stock markets function fairly independent of who is politically in charge. We were able to lessen the validity of some of Trump’s claims and point out the fallacies in many of his tenures. The data indicate that there were no significant increases and that his wins are merely a continuation of what was put into action before he took office.

To conclude, it is safe to say that the pre-pandemic growth has only followed the trend and the economy wasn’t exactly booming like it had never boomed before, at least that’s what my Machine Learning model says.

A big thank you to Viva Lancsweert and Humberto Barrantes for helping me on researching this topic and creating the nice charts.

Xavier is an entrepreneur, project manager, trainer, Certified Scrum Master & Professional and Certified Microsoft professional who has spent a great deal of his career working on cutting edge projects, with a primary focus on .Net and recently iOS. His expertise is primarily web applications, search and mobile. Throughout multiple projects he has acquired skills in dealing with complex enterprise software deployments with companies that range from startups to Microsoft. Also worked as a worldwide v-trainer/evangelist for Microsoft.
« The History of Everything Around Big Data
Working with Large Files in GIT (LFS) »
Share this: